Wolfgang boarded at the Weber house, where he met the Weber sisters and fell in-love with the second-youngest, Constanze. He wrote many letters begging his father's consent to his marriage. Leopold was opposed to the marriage, the biggest reason probably being because of Wolfgang's heartbreak with Aloysia, Constanze's older sister whom he fell in-love with some years before. His love for "Stanzerl" was genuine though, and they married the day before Leopold's consent letter finally arrived. They had a happy marriage of almost ten years until Wolfgang died at the age of 35. Here he describes Constanze in a letter to his father from Vienna on December 15, 1781, at the age of 25.
My good, dear Constanze is the martyr, and, perhaps for that very reason, the best hearted, cleverest, and (in a word) the best of them all. She assumes all the cares of the house and yet does not seem able to accomplish anything. O, best of fathers, I could write pages if I were to tell you all the scenes that have taken place in this house because of us two....Constanze is not ugly, but anything but beautiful; all her beauty consists of two little black eyes and a handsome figure. She is not witty but has enough common sense to be able to perform her duties as wife and mother. She is not inclined to finery,--that is utterly false; on the contrary, she is generally ill clad, for the little that the mother was able to do for her children was done for the other two--nothing for her. True, she likes to be neatly and cleanly, though not extravagantly, dressed, and she can herself make most of the clothes that a woman needs; she dresses her own hair every day, understands housekeeping, has the best heart in the world,--tell me, could I wish a better wife?


Many historians portray Wolfgang as a free, wild and immature boy before marrying. True, he liked to pull pranks and make jokes, but he also had a sense of self-honor and pride, and swore to his father more than once that he was as innocent as could be. On July 18, 1778, age 22, he writes to his father,
In my opinion there is nothing more shameful than to deceive an honest girl.


Here, Wolfgang writes to his father from Mannheim on November 13, 1777 at the age of 21. The man Beecké whom he writes about was a conceited pianist.
Beecké told me (and it is true) that music is now played in the cabinet of the Emperor bad enough to set the dogs a-running. I remarked that unless I quickly escape such music I get a headache. "It doesn't hurt me in the least; bad music leaves my nerves unaffected, but sometimes I get a headache from good music." Then I thought to myself: Yes, such a shallow-pate as you feels a pain as soon as he hears something which he cannot understand.
The Emperor whom Wolfgang speaks of is the Emperor Joseph II, who commissioned his writing of Die Entführung aus dem Serail (The Abduction from the Seraglio).


Wolfgang was very critical of the musicians and performers of his time...especially when they performed his works. Here, at the age of 33, he says of the Italian singers of the time:
They hurry the tempo, trill or pile on the adornments because they can neither study nor sustain a tone.


One Wolfgang's favorite composers was Johann Sebastian Bach. While in Leipsic in the year 1789, at the age of 33, he heard a performance of Bach's "Singet dem Herrn ein neues Lied," of which he exclaimed,
Here, at last, is something from which one can learn!


Wolfgang loved the music of Händel and knew his pieces by heart. He says,
Händel knows better than any of us what will make an effect; when he chooses he strikes like a thunderbolt; even if he is often prosy, after the manner of his time, there is always something in his music.


This letter shows that even Mozart had to practice! He writes here to his father from Vienna on April 28, 1784, at the age of 28. The man Herr Richter is a pianist on a concert tour.
Herr Richter plays much and well so far as execution is concerned, but--as you will hear--crudely, laboriously and without taste or feeling; he is one of the best fellows in the world, and without a particle of vanity. Whenever I played for him he looked immovably at my fingers, and one day he said, "My gosh! How I am obliged to torment myself and sweat, and yet without obtaining applause; and for you, my friend, it is mere play!" "Yes," said I, "I had to labor once in order not to show labor now."


Wolfgang knew composer Muzio Clementi, and did not care for his playing or music. To his father from Vienna on January 12, 1782 at the age of 26 he writes:
Clementi plays well so far as execution with the right hand is concerned; his forte is passages in thirds. Aside from this he hasn't a pennyworth of feeling or taste; in a word he is a mechanician.


Whenever one hears the name "Mozart", a piano seems immediately to come to mind. Wolfgang was known for his flawless playing, yet he seems to favor another instrument here, when he recalls a conversation with a friend to his father in a letter from Augsburg (his father's birthplace), October 17, 1777 at the age of 21.
When I told Herr Stein that I would like to play on his organ and that I was passionately fond of the instrument, he marvelled greatly and said, "What, a man like you, so great a clavier player, want to play on an instrument which has no douceur, no expression, neither piano nor forte, but goes on always the same?" "But all that signifies nothing; to me the organ is nevertheless the king of instruments."


Here we get an idea of how Wolfgang's mind worked. In a letter to his sister Nannerl from Vienna on April 20, 1782 he writes:
Herewith I am sending you a Prelude and a three-voiced Fugue...it is awkwardly written; the prelude must come first and the fugue follow. The reason for its appearence is because I had made the fugue and wrote it out while I was thinking out the prelude.
If you wish to look this piece up, it is piece K. 394.


Between the years of 1777 - 1778 (21 - 22 years old), Wolfgang described to his father a sudden burning desire to write an opera. (I'm sure it's no coincidence that Miss Aloysia Weber, the young woman he was in-love with at the time, was a gorgeous soprano.) Aloysia was Constanze's older sister, and the beauty of the family. She showed no interest in Wolfgang, however, and his affections for her eventually died off, then turned to Constanze, his "Stanzerl", whom he married in 1782 at the age of 26.
I have an unspeakable desire to compose another opera...
To his father from Munich, October 11, 1777.
You know of my greatest longing--to write operas...Do not forget my wish to write operas! I am envious of every man who composes one; I could almost weep from chagrin whenever I hear or see an aria. But Italian, not German; seria, not buffa.
To his father from Mannheim, February 2, 1778.
I am strongly possessed by the desire to write an opera...
To his father from Mannheim, February 7, 1778.


To his sister Nannerl from Milan on August 23, 1771. Wolfgang is 15 years old. Since 1769, Nannerl no longer tours with Wolfgang and Leopold, since she is a lady and must learn to keep a house.
Above us is a violinist, below us is another, next door a singing teacher who gives lessons, and in the last room opposite ours, a hautboyist. Merry conditions for composing! You get so many ideas! 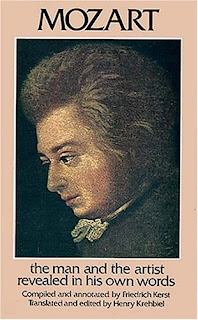 The above quotes and dates were found in the book:
Mozart: The Man and the Artist
Revealed In His Own Words

ALL NOTES WERE WRITTEN BY
MOZART'S MUSIC BLOG.
Email ThisBlogThis!Share to TwitterShare to FacebookShare to Pinterest