You may have seen the video I posted a while back about Mozart's alleged death mask. Since I am 99% convinced that it is his, I painted a portrait based on this mask. I found that the face resembles the portrait of Mozart painted by his brother-in-law Joseph Lange, the portrait that Mozart's wife Constanze said looked the most like him. While I am an amateur painter, I think one can get the basic idea. What do you think?......

(There's nothing wrong with your computer...that's a watermark over his face :))

The picture of the mask that I referred to hundreds of times while painting. 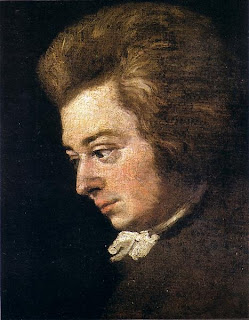 The Lange portrait.
While Mozart's hair appears brown in this painting, he actually had blond hair. Some artists think that Lange painted the hair brown because he was in a darker room.
Email ThisBlogThis!Share to TwitterShare to FacebookShare to Pinterest